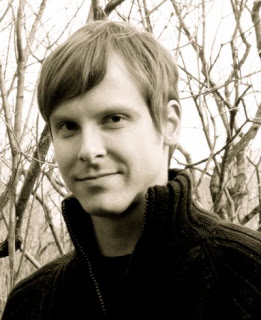 Dan Poblocki is the author of The Stone Child

. Click here to read my review of The Nightmarys. Here's his official bio from www.danpoblocki.com:

For some reason, I recently allowed myself to purchase the very addictive XBOX 360, and I now spend too much time playing all sorts of games. On any given day, you might also find me strolling through the Brooklyn Museum or Botanic Garden, reading books at the library, window-shopping in Park Slope, people-watching in Prospect Park, snapping photos of strange stuff I find on the street, gossiping with friends, sneaking off to matinee movies, swooning over puppy dogs, day-dreaming way too much… oh yeah, and writing.

I was born in Providence, Rhode Island, and lived in Woonsocket and Lincoln before my family moved to Basking Ridge, New Jersey when I was eleven years old.

Growing up in small towns shaped my imagination. I was always curious what was out in the dark of the woods or just over the horizon. Often, if my friends and I didn’t have an answer, we would make one up. The stories we invented were much more interesting than the truth, at least to us. And yet, the tales to which I now find myself drawn are a blend of fact and fiction. Strangely, I like it when I can’t tell the difference.

And now it's time for Dan Poblocki to face the 7 Questions:

I work full-time, so I don't spend as much time reading and writing as I wish. While working on The Nightmarys, I woke up early every day for nearly two years, spending about two hours in front of the computer before heading off to my day job. I would love to keep up that schedule, but it was exhausting! Recently, I've been able to write mostly during weekends. As for reading, I'm always in the middle of two or three books at a time, with a huge pile waiting on my night stand. One of the great things about living in New York City is the amount of reading one can get done while riding the subway. That is where I am able to find the time to actually dig into whatever I'm reading.

My path was roundabout. I'd been working on a YA novel for some time, attending classes and workshops, trying to meet as many people in publishing as possible, when I was invited by a couple of friends to form a writing group. We shared our work with each other, critiquing and encouraging one another. When I finished that particular project, one member of the group asked if he could show it to some editors he worked with at Random House. I was like, "Oh... yeah... sure... why don't you do that...?" Ha! Anyway, some of the editors really loved my project, and after a good long while (a year filled with revision letters and lots more writing) the publisher offered me a two book contract. The Stone Child was the first book, and The Nightmarys became the second.

I absolutely was not born a writer... I never felt I was smart enough, or had a big enough vocabulary. In fact, when I was young, I was frustrated that I couldn't make the words on the page convey the images and thoughts I had in my head. However, I loved telling stories. I loved performing. I loved reading. Becoming a writer took years of practice. I wrote terrible books which will never be seen. I never took a class, but I read everything I got my hands on. I talked to people about what they liked to read and why. I paid attention to what I thought was great and what I thought was terrible in each book, and what made them so. In recent years, I've finally felt confident to share my own work with people I trusted, and I was surprised to receive some genuinely kind enthusiasm. I think some people are born writers -- I however was not.

I love getting to the point where I know my characters so well, their words and actions take on a sort of inevitability, pulling the story forward. That's my favorite thing... Oppositely, the journey to that point is always filled with false-starts and detours and getting lost in a very bad neighborhood which is frustrating. I'd say that's my least favorite thing... that and spending so much time alone in my own head!

Read and write. I've heard so many people say, "Oh I have a great idea for a book I'm going to write someday." Make "someday" now. Be serious about it. Be playful too. Revise. Don't be scared to cut out what's not working -- you'll feel it deep down. Be brutal. It's SO satisfying to rebuild and make it better. Talk to people. Join a reading group. Join a writing group. Share your work with writers who are serious about their own work. Listen to critiques, but find a way to stick to your guns if you disagree. Make your story be what you intend it to be.

M.R. James - so he could tell me a ghost story. I love a good ghost story, and he's the best!

www.danpoblocki.com
Posted by middle grade ninja at 6:28 AM