Book of the Week: WINDBLOWNE by Stephen Messer 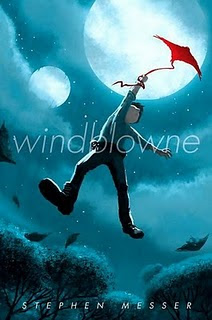 Do you like kites, Esteemed Reader? If I were to say to you: “let’s go fly a kite, up to the highest height. Let’s go, let’s go—” Okay, I’ll stop now. But honestly, I love kite flying on a good windy day in the fall. I realize we’re almost out of those and no one likes to fly kites in the snow, but here’s hoping I’m slipping this review in just under the wire and the wind can still be found for a few more days of kite flying before the bitter cold of winter sets in.
On our most recent vacation, I splurged and bought a stunt kite, which came with not one, but two grips. Through careful maneuvering, the package promised that I, a mild mannered ninja, could perform amazing stunts that would impress professional kite fliers. And so I learned, once again, not to believe everything I read as printed fiction is found in far more locations than just books. With my brother’s assistance, we managed to get the stunt kite into the air for almost three consecutive minutes! Otherwise, I performed the stunt of crashing the kite over and over again until it came apart and was left a ragged wreck of strewn pieces attached to string.

All this to tell you that I fully sympathize with poor Oliver, the young protagonist of this week’s book, Windblowne, the extraordinary debut novel of Stephen Messer. And will Mr. Messer be here on Thursday to face the 7 Questions? Of course he will! So make sure you check back then as you won’t want to miss that. Next week, we’ll be looking at a classic middle grade novel and there will be no interview posts on account of the holiday. But the week after that, Esteemed Reader, we’ll have Ingrid Law, author of Savy! We’ll also have some surprise literary agents drop in to see us, so stick with me, Esteemed Reader, and we’ll chat with some amazing folks and read some amazing books.

Speaking of amazing books, Windblowne isn’t just the title of this week’s book, it’s the name of the fictional town in which our story takes place. Windblowne is on a mountain and the residents live in tree houses—I like to imagine Endor without the Ewoks (it wouldn’t be the same). As their name implies, the winds are plentiful in Windblowne and each year the non-Ewok residents hold the Festival of Kites. There are prizes to be won for events such as distance jumps in which residents leap off a peak of the mountain and fly a distance using their kite. The survival rate is higher than you’d think, the festival provides tourism income, and the residents compete fiercely to build the best and brightest kite.

Enter Oliver, who is about as skilled with his kite as the ninja is with a stunt kite. He hasn’t got a hope of placing in the festival and so he will forever be known as a loser. But, he’s got a great uncle who was a former champion kitesmith, who his parents have never mentioned before because they’re “crackpots.” Great-uncle Gilbert is a bit of a crackpot himself and Oliver worries over his own sanity, which is a point of some importance as the story continues.

Messer never quite comes out and says "here is the deal with Windblowne," and I really admire that choice. Windblowne is not a real place, of course, and there are some almost magical qualities about it that Messer reveals only as they become relevant to the story. There is no chapter detailing that Windblowne exists on another planet or is the home of a magical tribe forgotten by history, only subtle and some not so subtle hints along the way as to what sort of place Windblowne is. For example, Messer nonchalantly drops in lines like, “The two moons gleamed beyond.” Two moons? Gory, what sort of place is this?

Great-uncle Gilbert specializes in kites unlike any ever sold a K-mart. He has fighting kites and a kite with jaws to eat other kites. One kite in particular befriends Oliver and becomes his traveling companion. This plain crimson kite is capable of flying Oliver off to faraway lands—more on that in a moment. But first, from a craft perspective, it’s fascinating to see how Messer is able to give a typically inanimate object such as a kite personality, even though it is incapable of speech. Here are the kite's parts of a conversation held with Oliver, minus Oliver's lines:

Windblowne is a wonderful adventure and you’re going to love it. It’s a fun yarn that reminded me a bit of A Wrinkle in Time in that it’s great middle grade science fiction. I really can’t tell you anymore about the book without spoiling some of the surprises. If you’ve read the book or you’re willing to put up with a few minor spoilers, read on. Otherwise, your review ends here: Windblowne is one to put at the top of your reading list and make sure you come back around on Thursday to see Stephen Messer face the 7 Questions.

Those of you who are okay with a few spoilers won’t mind knowing that Great-uncle Gilbert’s plain crimson kite is capable of dragging Oliver to another version of Windblown in a parallel dimension. Yes, there are multiple dimensions and multiple versions of Windblown. There are beams that run through all the worlds and in the center of those beams stands a great Dark Tower in a field of roses. Okay, I made that last part up, but give yourself a pat on the back if you’re cool enough to be familiar with the reference from an amazing series of books for adults. You have not forgotten the face of your father.

In another version of Windblowne is another version of Great-uncle Gilbert called Lord Gilbert (way better title), and he explains the situation thusly: "It seems that in his primitive way, he had a kind of native cleverness, and he was able to construct one of these kites"—he spat the word with derision—“in such a way that it could carry someone—only someone small, such as a child—across the Way Between Worlds and between Windblownes, without harming the passenger."

Lord Gilbert busts Oliver’s crimson kite, stranding him in the new world forever to work as a slave repairing kites with another world's less likable version of Oliver. Worse, Lord Gilbert has banished Great-uncle Gilbert on a hell-world. Oliver must fight to save Great-uncle Gilbert and to return to his one true home world. It’s gripping drama and the pages turn themselves. I especially loved all of the different versions of Windblowne Oliver visits. Its fun to imagine how different variables might forever change a world in another dimension. Is it possible there could be a Historical Romance Ninja in a parallel dimension I could meet if only I had a magic kite?

That finishes out the review for everyone. And now, as I do every week, I’ll leave you with a few of my favorite passages from Windblowne:

Vivid banners fluttered in the windows, advertising special Festival discounts. Oliver knew the discounts were a sham. All kiteshops doubled their prices during the Festival.

At first he feared that even this book would not be enough to hold down the kite-eater, but no matter how much it twisted and fought and snapped its jaws, it could not escape the sheer weight of The Social and Cultural History of the Lower Wayfeld Valley in Late Mid-Age Macherino. Oliver knew the feeling well.

Oliver had always talked to his kites, but he'd never had the impression that one of them might be listening. Or if they were, it was only so they could do the exact opposite of whatever he asked. For example, "No, please, not in the tree" was interpreted to mean "Please dive directly into the tree," or "Watch out for the crowd of people" meant "Smash into the crowd of people in order to humiliate me as much as possible."


STANDARD DISCLAIMER: Book of the Week is simply the best book I happened to read in a given week. There are likely other books as good or better that I just didn’t happen to read that week. Also, all reviews here will be written to highlight a book’s positive qualities. It is my policy that if I don’t have something nice to say online, I won’t say anything at all (usually). I’ll leave you to discover the negative qualities of each week’s book on your own.
Posted by middle grade ninja at 7:16 PM