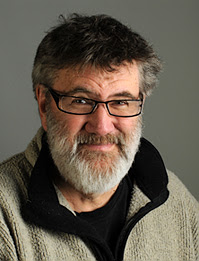 Tim Wynne-Jones is the author of Rex Zero and the End of the World,

Rex Zero, King of Nothing, Rex Zero, The Great Pretender, The Uninvited,

A Thief in the House of Memory, and Zoom

. Click here to read my review of Rex Zero: The Great Pretender.

Here is a very funny bio that Mr. Jones wrote for the Macmillan website:

Writing a bio in the first person always makes me think of those boring people who back you into a corner at a party and tell you about themselves. The worst part is that they invariably situate themselves between you and the chips. I like chips. I like food. I love cooking. And crossword puzzles and cross-country skiing, although I make a point of not trying to do these activities at the same time.
I started writing when I was in my twenties. Never dreamed of becoming an author. Oh, I loved reading, but I had known since I was eleven that I was going to be a world-famous architect when I grew up, so I never took my writing very seriously. Besides, I failed high school English. But the university where I was training to become a world-famous architect thought it might not be such a good idea for me to design buildings into which real people might actually stray by mistake. So I turned to making art, which led to an M.F.A., which is when I realized that if I wasn’t careful, I was going to end up being offered a teaching job! So I wrote a novel very quickly.
Winning the $50,000 Seal First Novel Award in 1980 convinced me to put aside my designing, acting, singing, painting, teaching career and take writing seriously. Twenty-six books later, I’m still doing it and still loving it.
I’ve won lots of awards. Oh, here -- can I get you the chips? You just munch away and I’ll tell you all about my honors: a couple of Governor General’s Literary Awards in Canada; three Canadian Library Association Prizes; the Arthur Ellis Award -- that’s from the Crime Writers of Canada; the Edgar Award for Young Adult Mystery from the Mystery Writers of America; the Boston Globe-Horn Book Award; and I’ve twice been short-listed for the Guardian Children’s Fiction Prize in the U.K. . . . Are you feeling woozy yet?
I’ve written three adult novels, but I got over that. I’ve also written a dozen picture books, three collections of short stories, and five novels for older readers, including A Thief in the House of Memory

. The last novel before that was The Boy in the Burning House

. Notice the house thing? You see? I’m still obsessed with architecture. The next title almost had a house in it, but I changed it to Rex Zero and the End of the World

. It’s pretty funny, I think, considering it’s about the end of the world. I’ve already written the sequel, Rex Zero, King of Nothing

Oh, don’t go. Please! I haven’t told you about my three very talented grownup kids and my wonderful wife and the cats and the seventy-six acres of land just outside of Perth, Ontario. I’ve got lots of pictures. Some other time? Okay.

Tim Wynne-Jones lives near Perth, Ontario, with his wife, Amanda, in a house he designed himself.

Here's a link to his extremely practical advice for writers.

The House at Pooh Corner, by A.A. Milne

The Golden Compass, by Philip Pullman

I read around 60 novels a year, sometimes as many as 80. So somewhere between 5-7 a month. I guess I read a couple of hours, at least, every evening, and when we're at our camp way up north I read a book a day, easily. But I also do a lot of reading when I'm writing, because a lot of what we call writing a book, means rereading it, over and over again as you write. When I'm actually writing a book I work on it pretty well every day, although when my kids were little, I always stopped as soon as they got home from school, and I never worked on the weekends. Typically I write from really early in the morning until early afternoon.

I was lucky to win a $50,000 prize for my first novel, which was submitted as a manuscript, so I didn't have to go through any of the submissions and rejections which are typical of first publication. However, I have since been rejected and it sucks.

All of the above. But writers are mostly keen readers. You learn to write primarily be emulating the writers you honor most. When I read a book I'm inside it, man! I'm living and breathing with that protagonist. And when I started writing, I wanted to feel the same way. Obviously it takes longer to write a book than to read it but unless I feel excited and inside every single scene then I'm not very happy. As a teacher at Vermont College, I do truly believe a writer who has the spark and elementary skills can raise his or her game to a pretty high level. So yes, you can be taught, but you've got to love it. That's what we look for in applications -- this burning love to write.

My favorite thing is writing the second and third draft. My least favorite thing is getting through the first draft. That's when I live and breath the darn book. I don't sleep very well and my characters are with me everywhere I go -- I just don't get any privacy!

Read and write. Read the books you love and try to write the kind of book you'd love to read.

John Le Carre. The favorite books I listed above are books I either enjoyed or would have enjoyed as a kid. Le Carre's adult novels are my favorite adult books and I admire him tremendously.
www.timwynne-jones.com

Posted by middle grade ninja at 7:34 AM