Book of the Week: REX ZERO: THE GREAT PRETENDER by Tim Wynne-Jones 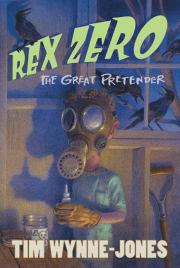 Rex Zero is a series of humorous historical fiction novels. I haven’t read them all yet, but you can bet I will. The Great Pretender is actually the third book in the series and although it may spoil parts of them, it is not necessary to have read the first two books to enjoy this third. I had no problem picking up the story as a first time reader of Rex and I enjoyed this book a whole lot. It’s funny, it’s exciting, it’s very well written, and it’s got a great story most anyone can relate to. What more could you ask of a book?

You Esteemed Readers who check the blog regularly know what a fan I am of writers coming right out and stating the date. It just makes things easier for the reader and when in doubt, a writer should almost always make their decisions based on what will make their book a better, easier experience for their reader. If I’m searching for a date or a frame of reference, I’m not caught up in your story and swept away wherever you were hoping to take me (and I want to come, so just throw me a bone and tell me the date so I won’t worry about it).

Now prior to working in the actual year, Wynn-Jones drops plenty of hints that we are not in present day and of course, if I had read the first two Rex Zero novels, I would know the time period—but I hadn’t and a writer can’t count on my having read them. The music selections that come up as well as the fact that they are played on a record player clue the reader in as to the time period early. Also, the fact that Rex is reading the original Hardy Boys novels . Also, the mentions of the costs of things that are extremely cheap by today’s standards. My father paid a nickel for his comics, I paid a little over a buck, today’s kids pay almost two bucks, and my children will probably pay five—although this is standard inflation, I still blame Ayn Rand:)

Here’s another example of exposition cleverly worked in:

I pound the carpet and dust puffs up. “When we move it will be the eighth house I’ve lived in. The eighth! I’m twelve years old and I’ve lived in eight houses.”

My second craft point is how well plotted this book is. The novel’s main antagonist doesn’t show up for about sixty pages, and even then he’s only a minor force of antagonism for several more pages. But the novel doesn’t need him until that time because the opening is rooted in conflict. By the end of the first chapter, Rex learns his family is moving and he will have to go to a new school away from his best friends and it isn’t fair. Over the next couple of chapters we learn that the family is only moving to the other side of town, just far enough to put Rex in a different school district.

Rex and his homies figure out a plan: Rex can take the city bus across town and go to school with them. He just needs to stop his parents from registering him at his new school and to lie to them about where he goes each day and to lie to all of his teachers about where he lives and not to draw attention to himself lest he be found out. Simple, right?

Of course not! This is a situation so rife with conflict and the complications of further conflict that an antagonist is not needed for pages upon pages. There’s plenty of suspense without him for a good long while. And when he finally does show up, I promise, it’s worth the wait.

Is Rex found out? What lengths is he willing to go to to keep his secret? I cannot tell you without spoiling the book and I don’t want to do that, so we’ll leave it here. And I haven’t even told you about Rex’s sister Annie (by far my favorite character) or the other beautifully drawn characters that populate these pages. But I really do have a heavy workload, so we have to call it a review.

Be sure to come back Thursday to enjoy Tim Wynne-Jones facing the 7 Questions and on Saturday for our surprise (at least act surprised to see Chris Richman) literary agent interview. I’ll leave you now with some of my favorite passages from the Rex Zero: The Great Pretender:


A lot of words pile up in my mouth: words with spikes and claws and sharp teeth.


My mind is buzzing and bouncing around like a bee in a flower shop.


…The rubber ball in my chest finally stops bouncing and just sits there feeling hard and worn out on this concrete floor inside my chest.