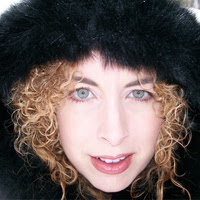 Laura L. Sullivan is the author of Under the Green Hill

. Click here to read my review. She was born and lived most of her life in Florida. She moved to Kentucky a couple of years ago so she could raise her son in the mountains. She has a BA in English from Cornell University. She once assumed she would be an English professor, but soon realized she can’t stand to deconstruct and analyze books she loves.

Laura has been a social worker, biologist, newspaper editor and most recently a deputy sheriff. Above all, she is a dilettante.

You’ve already given me permission to cheat, and frankly, even if you hadn’t, I’d have to cheat on this one anyway. As a coach once told me, if you ain’t cheatin’, you ain’t tryin’. I think he’s in the pokey now… Anyway, “favorite” questions are horrible. It’s like asking a mother which child is her favorite. She might have a favorite, but she won’t even want to admit it to herself. Can you imagine the expressions on those poor books’ faces when they heard they weren’t my favorites? Oh, did I mention I anthropomorphize everything? Except people. Those I try to treat like inanimate objects.

I’m going to lump all of George MacDonald Fraser’s Flashman novels into one long, deliciously salacious book. That cad Harry Flashman is my idol. One of those wicked idols with a cursed gem in their eye.

Likewise, I’m going to create my own giant Edith Nesbit Omnibus and call it a single book. She is the best, the absolute best children’s writer, and I study her work yearly. I also snuck a Psammead into the sequel to UNDER THE GREEN HILL. (GUARDIAN OF THE GREEN HILL – out Fall 2011.)

Hmm… all those hopeful books with their big puppy eyes… who should I pick? I know! But I have to make another omnibus.

I only started reading Eva Ibbotson about half a year ago, and from the very first book (Journey to the River Sea, I think) I knew she was going to be someone I’d re-read for the rest of my life. And when I found out she wrote blissfully happy, fiendishly clever historical romances too… swoon! Every book has a happy ending. I’m not good at happy endings myself (mine are mostly ambivalent) but I long for them. Her books, quite simply, give me joy.

Oh, too much time reading! No, that’s not true. From a purely business standpoint I should probably write more, but reading feeds me. Writing is a joy, but still work. Reading is a hobby, a pleasure, a necessity, a compulsion. I get a mini panic attack if I don’t know what I want to read next.

I have a two-hour block – my son’s nap-time – set aside each day for writing. Lately, though, I’ve had to devote at least some of that time to business – social networking, fan mail, chats with bloggers, self-promotion. My goal is about 1,000 words a day. More is better, but if I do that, at least, I’m satisfied. In another year and a half my son will start school, and I wonder, will my output dramatically increase, or will I start playing Farmville?

I read whenever I can, but at least a half-hour while on the treadmill and an hour in bed before I go to sleep.

The only thing I ever wanted to be was a writer (except for a brief childhood stint of wanting to be a marine biologist, but that hinged on me being able to telepathically communicate with dolphins, which, for some reason, I could never quite manage.) I wrote my first novel in high school. It was, of course, terrible (a total Mary Sue story, where the heroine was a thinly disguised idealized version of me who could do everything from swordplay to basket weaving, was the Chosen One, and with whom every man, elemental, and immortal instantly fell in love) though it set up some themes that echo in my work to this day. Maybe two more trunk novels as I honed my craft and figured that I should write for an audience, not as wish-fulfillment, then finally I wrote something I thought was wonderful. And I’m pretty modest, so if I actually admit a story of mine is good, that’s saying something. It was UNDER THE GREEN HILL. I thought, this is my absolute best effort, and if no one buys this, I might as well give up.

Scores of agent rejections later, I kept my word. I backed up all my work on a disk, locked it away, and became a deputy sheriff. Yeah, I know! Tell me about it! Didn’t write a word outside of police reports for four or five years. Had a blast, while it lasted, but it wasn’t really for me. Then I had a baby, left law enforcement, took out my old work… and realized I still had complete faith in UNDER THE GREEN HILL. I sent it out, and within two months I had an agent and a two-book deal with Henry Holt Books for Young Readers.

What’s the lesson in all that? Persevere? Never destroy your failures? Never let your failures destroy you? The market is always changing? If at first you don’t succeed, get a gun and a badge? I don’t know. I’m not good with lessons. Really, I think life is about luck. You make some of your own, of course…

Since then I’ve sold three more books – LADIES IN WAITING, a bawdy YA historical set in the 1660s Restoration court of Charles II, and DELUSION, about a pair of illusionist sisters at the start of WWII who discover a college of real magicians, and enlist them in the war effort. They’ll come out in Spring and Fall of 2012, respectively, both with Houghton Mifflin Harcourt. Then I have an undeclared book set for 2013.

Born and self-taught, I think. You can’t teach someone to write. I’m not saying people don’t get anything out of an MFA… but it usually isn’t a spot on the bestseller list. It usually isn’t throngs of rabid fans. I’m sure there are plenty of exceptions, and I don’t really know what I’m talking about. I don’t want everyone with an MFA showing up at my door with perfectly crafted phrases of vitriol… which are then workshopped into even more exquisitely cutting sentences before being sold to a prestigious literary journal which only MFAs read. Plenty of people with MFAs produce lovely books – works of art, I’m sure. I just don’t read them, for the most part. And I’m willing to bet that those who do go on to write books that are both great and popular would have done so anyway.

You can teach certain aspects, of course. But I think it would be like trying to turn me into a ballerina. With a lot of hard work I could get some of the mechanics down, but I don’t have the body, the will, the spirit, the gift for it. One would say, oh yes, she learned that move, but never in a million years could I give a performance that would make the audience’s souls sing.

For me, I learned to write by writing. I don’t think you can be a great writer without being a great reader, but certainly not every reader has the capacity to become a writer. Personally, I don’t have a critique group, and my editor and agent are my beta readers. But that’s just me. I’m the Lone Writer. Heigh-ho, Silver!

There is so much I love. That moment as I’m drifting off to sleep when I come up with an amazing new story, and I wonder if I’ll remember it in the morning, and I realize I hardly even care, because right at that moment it is so perfect…

The big Cs of affirmation: the Call, the Contract, the Check… and the knowledge that I’m supporting myself and my son by doing what I love.

That strange feeling of performing for an audience that isn’t there yet, a wonderful mixture of isolation and community…

I think what I love most are those moments of epiphany, when a tricky plot or character suddenly resolves itself in an almost magical fashion, and everything becomes clear.

Do I have wisdom? Aw gee…

Read, write, research. And by research, I mean both study everything that takes your fancy, because a smart writer is a better writer, and also research the business-side of writing. Because you do want to make money, don’t you? Ideals are all very well and good, but they have to be tempered. Go on the writing forums (Verla Kay’s Blue Boards are great for children’s writers) and read agent and editor blogs.

Don’t let disappointment crush you. So much of life is luck. But do figure out how to take a cool, unemotional look at your own work.

I've never been big on knowing the people behind the books. I think the work is so much more important than the personality (though I've talked about myself enough in the last few pages, eh?) Dickens would condescend to me. Jane Austen would find me shocking. Oscar Wilde would steal my epigrams and ask to borrow money. But I think I could have a good time with P.G. Wodehouse. Plus he liked George MacDonald Fraser, so we’d always have that, if conversation faltered. Lunch with Saki (H. H. Munro) would be good, too, because I've always wanted to write a story about someone who was almost, but not quite, him.


www.lauraleesullivan.com
Posted by middle grade ninja at 6:40 AM