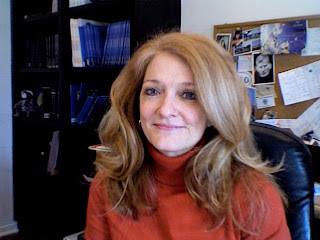 Peggy Tierney founded Tanglewood Publishing  in 2003, just after her move to the Midwest. Peggy has been a children's book editor and publisher in the UK and in the US since 1995. She has a degree in comparative literature from the American University of Paris, has lived to read since she first learned her alphabet, and has a teenage son who is constantly inspiring her to find good books for reluctant readers.
Tanglewood has published many popular titles, some of the most recent being Chester the Brave by Audrey Penn, Ashen Winter by Mike Mullen, Night of the White Deer by Jack Bushnell, Kiss, Kiss, Bark! by Kim Williams Justesen, Chengli and the Silk Road Caravan by Hildi Kang, My Dog, My Cat by Ashlee Fletcher, The Rock of Ivanore by Laurisa White Reyes, and The Tiptoe Guide to Tracking Mermaids by Ammi-Joan Paquette.

To learn more you can read this interview with Peggy or a short piece she wrote on the founding of Tanglewood.

I had the good fortune to meet Peggy and her charming husband at the launch party for Ashen Winter by my good friend and critique partner, Mike Mullin. I've also seen first hand the remarkable work she's done in transforming Mike's very good manuscript into an excellent published novel. Peggy is warm and friendly, but with a steak of no-nonsense in her that has clearly helped Tanglewood and its authors to thrive. I consider the advice she's given me to be invaluable and I'd recommend her to any author fortunate enough to have their book published by Tanglewood.

And now Peggy Tierney has the distinction of being the first editor to face the 7 Questions:


Here are my top three favorites as a child:
Misty of Chincoteague - I loved this story so much that my best friend and I were wild ponies nearly every recess.
Charlie and the Chocolate Factory
Pippi Longstocking

Top three contemporary adult books:
Jonathan Strange and Mr. Norrell by Susanna Clarke. I think I enjoyed, no relished every single word of every single page of this book--even the footnotes. I didn’t want it to end, which almost never happens, as I’m already thinking about the next book I want to read before I finish the present one. Not this book. I read it again a few months later. And then I read it again a few years later. I’m now afraid she will be another Harper Lee - who publishes one outstanding novel and stops.
Atonement by Ian McEwan. Other writers have tried to capture the notion of the past being always with us, but no one has quite conveyed so well the idea that at any moment in our lives, we are the sum total of our past. And the unexpected ending nearly made me weep at its perfection, at the limits in both art and life. Sigh.
The Poisonwood Bible by Barbara Kingsolver. Not only is Barbara Kingsolver a masterful storyteller, her character-building is amazing. Each of the three voices was so unique, so real. And I also loved the theme of a person going to a foreign country and thinking that they won’t have to change, that the country will adapt to them. My time living overseas gave me insight into this, and she captured perfectly what I learned: Assimilate or die.

Movies: The Wizard of Oz, Pulp Fiction, and Elf.

TV: Northern Exposure, Mad Men, and Downton Abbey. If I am depressed or stressed out, I watch The Gilmore Girls. I want to live in Stars Hollow. Intellectually I know it doesn’t exist, but emotionally I want to think it does exist somewhere, kind of like Santa Claus.


Question Five: What are the qualities of your ideal writer?
What every editor/publisher wants: exceptional writing skills and inspired story ideas, open to feedback, willingness to promote themselves and their book. It’s a happy bonus if I really like them as a person; editing a book is a journey that an author and editor take together, and it helps if we connect as people. Some of my authors have become close friends, and one author is extended family at this point.

For age range, the YA market is glutted right now and the picture book market is still tough, so something for ages in between would be easier to get signed than YA or PB right now.

For subject matter, I think an original and genuinely creepy ghost story would always be good. But with so much supernatural stuff out there, I’d like to do more realistic fiction. The problem is that so few adults can write realistic teen fiction - I have my own teen who has made that very clear to me. I have heard the word “lame” a lot. Some adults think if they throw in some slang and some sex and/or drugs, that will make the book cool. No, actually it won’t. Not unless it sounds like a real teen’s approach to either.

Another thing I’d love would be to get some really interesting nonfiction, especially history or biography. Is there a David McCullough for kids or teens out there? If so, please send me your manuscript.

I am not trying to dodge the question, but my favorite thing is: editing. I love digging into a story, to see and hear and feel what they are trying to do and hope that I can help them do it even better.

If you are wondering why it is so hard to get published, the answer is in the numbers. Even a tiny publishing company like Tanglewood gets, literally, THOUSANDS of manuscripts a year. I have an acquisition editor just to deal with them. Out of those thousands that she reads, she passes on to me maybe forty to fifty manuscripts. Out of those forty or fifty, I maybe pick one or two.

It’s not over. Even if it is published, it is competing with thousands of other books published, many by established authors -- authors who already have a name readers are looking for. There are only maybe 200 slots for new children’s books in a particular format for any one season and 5000 books that publishers are pushing to fill one of those slots. Did I mention that it’s a tough and competitive business? Yes, it is.

If you are determined to pursue publication, then I would say to never underestimate the importance of your cover letter. The synopsis should be a wonder of conciseness while still capturing the essence of the book and creating interest. If a synopsis is long and rambling, I assume the book is going to be the same.

The writing in general should sparkle every bit as much, if not more than the manuscript; I will start reading the manuscript already convinced that you are a good writer. Tell me who the book is written for, and how it fits into that market, i.e., what book is this like but how is it different? Tell me your background. While I love to hear about a writer’s passion, keep it professional and don’t sound like a diva. Let me know how hard you will work to make your book a success. In other words, sell yourself to me;  that helps me to sell your book to others.

Shakespeare of course. I have so many questions, I really need a weekend with him. Did he know he was creating great literature, or was he just trying to provide great entertainment, not consciously intertwining so many themes, so much richness? Why did he leave his bed to his wife in his will? Who were the sonnets written for? If not Shakespeare, then Flannery O’Connor for a chat about human nature and spirituality. And I think we would laugh a lot, and I do like to laugh.

I’m so lucky that I have some truly great writers at Tanglewood, and I’ve been to lunch with almost all of them and gotten to ask them about process and inspiration (though I never asked them who they were leaving their bed to in their will). One of my authors--and her family-- lived with me for two months, recovering from an illness.

I notice you didn’t ask about having lunch with an EDITOR (ahem). That would be my ultimate dream: to have lunch with Ursula Nordstrom.

www.tanglewoodbooks.com
Posted by middle grade ninja at 9:57 AM