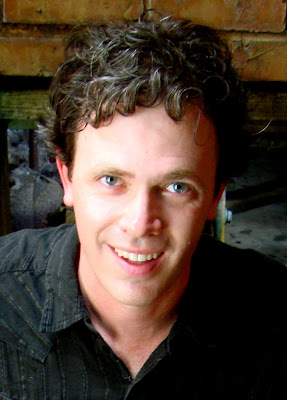 John Claude Bemis tried to write about wizards and dragons. Growing up in rural eastern North Carolina, he read fantasy classics like J.R.R. Tolkein and C.S. Lewis. But when it he began writing his own fantasy-adventure books, he decided to look to a different set of archetypes. John found inspiration for his fiction in old-time country and blues music and began to explore how Southern folklore could be turned into epic fantasy. This passion grew into The Clockwork Dark

, a trilogy set in a mythical 19th-century America full of hoodoo magic, battling trains, and mermaid-like sirens in the swamps of Louisiana.

The first book in the trilogy, The Nine Pound Hammer

(Random House, 2009), was described as “a steampunk collision of heroes, mermaids, pirates, and good old-fashioned Americana” by Booklist and was a New York Public Library Best Children’s Book 2009.

is the second book in the trilogy and will be followed in summer 2011 by The White City. John Claude Bemis lives in Hillsborough, NC with his wife and daughter.

His Dark Materials by Philip Pullman. Souls manifest as animals. The truth-telling alethiometer. Armored bears. The brilliant world-building is matched by a stunning concept for the plot.

Mortal Engines by Philip Reeve. I don’t think there’s a single truly evil character in this epic sci-fi quintet of books. But it definitely has one of the best villains: the terrifying resurrected man, Grike.

I write 3 – 4 days a week, usually for about 6 hours at a time. I also find many other hours in the week to work things out in my imagination when I’m washing dishes, driving, or taking hikes. I read every day as much as I can. Reading is a critical part of how I’ve learned to be a writer.

Forming a critique group pushed me to work seriously on trying to get published. I can’t stress enough how important it’s been to have that creative community of ambitious and talented fellow children’s book writers. Three of the four of us are now published. Along with Jennifer Harrod (who you’ll be reading one day), there’s J.J. Johnson, whose debut is coming out this spring, This Girl Is Different, and Stephen Messer who wrote Windblowne and has The Death of Yorik Mortwell coming out next fall.

I did considerable research to find an agent I felt was the best fit for what I was writing. My time was better spent researching agents’ likes and dislikes rather than to submit blindly to lots of agents. My agents Josh and Tracey Adams are amazing. Josh knew immediately the editor who was right for my stories: Jim Thomas at Random House. Through lots of work, I’ve had the good fortune of teaming up with amazing people who have made my stories the best they can be.

Anyone can be a writer. I don’t believe a gifted few are born to be artists. I believe anybody who feels an artistic calling can become more creative through hard work. Nature surely plays a role, but the creative arts are nurtured. Imagination and story-telling are learned skills just like rebuilding an engine and making jump shots. It takes lots of practice and discovering your unique artistic sensibilities.

When I’m engrossed in the process of creating a book, it’s like enjoying the best possible movie. To be deeply a part of the characters and their world as I live the story in my imagination is an extraordinary experience. I love planning. I love hitting obstacles and sorting them out. I even love revisions. My least favorite part is probably the anticipation as I wait for a new book to hit the shelves.

Write the story that nobody else but you could possibly write. Take what you’re most deeply passionate about and weave it into your story. Make that story wildly original. I think the best way to generate wildly original ideas is to put unexpected subjects together in ways readers have never seen before. This is the richest sort of creative thinking. A spider who writes messages in a web. A boy being raised by a graveyard of ghosts. A journey in a dirigible peach. To come up with these sorts of boldly unique ideas, you have to look deeply at the world and notice strange, unexpected patterns. You also have to have a lot of guts to put your unique vision out there for readers.

J.K. Rowling. I have so many questions for her. Not about the world of Harry Potter but about her creative process.

Posted by middle grade ninja at 7:05 AM